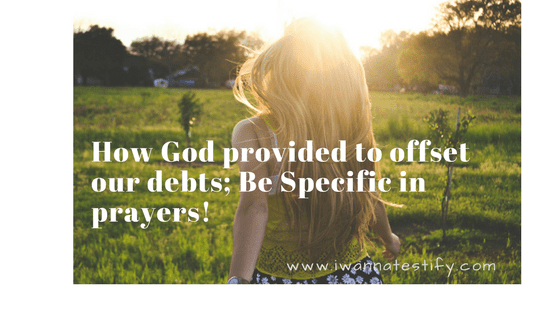 How God Provided Money To Offset Debt; The Incredible Benefit of Being Specific In Prayer.

In 2014, we had our 3 little kiddos and were expecting another one. Thus, we felt the need to move to a bigger place. Only my husband had a job at the time, so we thought we‘d look toward the outskirts of Oslo, Norway for a more affordable property fit for a family of six.

At the onset, we had only a vague picture of what we wanted: a budget, the desired number of rooms, and a woolly idea of places we wanted to live in. We didn’t think it was necessary to ask God for other things that made living in a place convenient: street traffic, distance to the grocery stores, distance to the library,  type of schools in the neighbourhood etc.

We searched and viewed all possible houses in the city until we were flummoxed. We’d seen all types of properties. The grueling long search soon made us indecisive. We wanted this house and the next and the other.

One day, during either a bible study or a prayer session, I felt the Lord ask me, “What do you really want?” Pointing me to (Mark 11:23) which says, “Whosoever shall say unto this mountain, Be thou removed, and be thou cast into the sea; and shall not doubt in his heart, but shall believe that those things which he saith shall come to pass; he shall have whatsoever he saith.”

This mountain signifying — a definite request.

I believe the Lord nudged me to put it down in writing. After discussing this with my husband, we came up with the following

Finally, I desperately asked God for a prayer room

Around my 7th month of pregnancy, we visited a couple who lived in this calm and well-kept community called Ås, situated in the Akershus province of Norway. It’s lavishly surrounded by quaint houses, well-tarred walking, and bicycle paths and sandwiched by nicely manicured hedges. The streets had a calm traffic and were surrounded by lovely greeneries. It also had a short route to the bus stop.  The library and the grocery stores were only a stroll away. At first, I was but attracted to the serenity of the neighborhood, the feeling of fresh air, and the birds chirping. The well-kept parks fascinated me even more. As our friends saw us to our car, almost in a flighty way I said,” Lord, I would love to live in a neighborhood like this”.—We were in for a big surprise.

From that time on, we started considering the neighborhood of Ås in our search.  Turned out, property prices in Ås were awfully pricey. As we viewed properties in Ås, we noticed that though the asking prices of the houses were at the upper bound of our budget, they were eventually sold for higher prices — anything from 200,000 Norwegian kroner or more (33,000 Canadian dollars) above the asking prices. In fact, one property we’d gone to see in Ås was sold for 1.5 million Norwegian kroner (250,000 Canadian dollars) above the asking price—thanks to the property bubble market.

After this outlandish pricing episode, we were exasperated and decided to take our eyes off Ås and settle for somewhere more affordable. Though our decision was to forget Ås, every so often, the allure of  Ås came tugging at us. One day, we saw a property for sale in Ås, our treasured location; we gave it one more try. Unlike the previous house viewings here, strangely, we were the only viewer for this property. This rather shocked us until we learned that the property had been on the market for a while. It wouldn’t sell because of a drainage problem in the basement. As we set our eyes on the house, it evoked no special feelings. The house was anything but splendid. Instead, it had a bland and empty look. We were hesitant. On a second thought, we wondered if this could be an opportunity that’s been shrouded in rags waiting for us to refine?

We consulted with some plumbers who gave us a glimmer of hope to purchase the property. On that slender thread, we dared to buy the house and hoped not to be greeted by mold surprises. After we fixed the drainage problem, we touched up the paintings inside the house, pulled down the wall separating the kitchen from the sitting area and behold, magic happened!

We began enjoying our house with all we’d asked for — a three-bedroom house with an attached rental property, the child-friendly neighborhood and a very low street traffic. The closest school which was about 4 minutes walk from our house, was the exact school suited for my first daughter. Not to mention the park merely 2 minutes away.

The day finally came when the former house owner —a Christian woman— came visiting. She was surprised at the changes we’d made to the house. She couldn’t believe it was the same house she’d sold us months earlier. As we got talking, she revealed something gripping to me. “The room in the basement was my prayer room”, she explained, “It was sacred to me and I would want you to do the same.” She said she felt the need to tell me. Astounded by what I just heard, I immediately felt a tingling sensation of God’s love inside of me. In the subsequent days,  as I kept wondering why this lady divulged that to me, I was engrossed with the thought that perhaps God wanted to hint to me that he’d given me exactly what I asked for.

I believe God wanted to show us that we could ask for anything —within the boundaries of His will— in faith and receive it. It mesmerized me that God cared enough to hear every single word we uttered. She telling me definitely built up my faith.  I believe being specific in our prayers helps us recognize when we receive our answers; convinces us of the graciousness of God, and increases our confidence in God. This definitely jacked up mine.

More still, about one year later, in October 2016,  the time came for us to leave Norway for Canada. With deep sighs and heavy hearts, we began the process to enlist our house for sale. It was no pleasure having to let go of our “promised” home. After we contacted a realtor to enlist our property for sale, we wondered if the balcony and some other things we needed to fix would affect the sale of the house. Here again, prayer dispels doubt. Philippians 4:6 tells us not to worry but to pray about everything.

We employed our newfound truth about making definite requests in prayer by faith. We asked the Lord to send someone who would buy the house within three months (we scheduled to leave Norway Dec 12th) for a price we had in mind. We had only three months to tidy up the house, sell the house, and handover to the new buyer.

Surprisingly, someone who desperately wanted to buy a house in that neighborhood contacted us before we put our property up on the market. To cut the long story short, we sold this property before the official viewing day for 1 million kroner (more than 166,000 Can Dollars) more than we bought it in the previous year.  Did I mention that because of the initial drainage problem, we bought the house for less than the asking price?

This is just one testimony of how God answered a specific need and sent financial relieve to offset our debt.

“Only ask, and I will give you the nations as your inheritance, the whole earth as your possession”. Psalm 2:8

What we learned from this episode: