My Life Before and After Drugs; How God Saved My Life—Rob’s Story 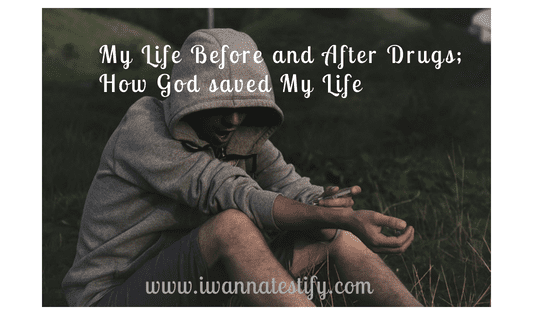 I was probably fourteen (14) the first time I smoked pot.  As a teenager, I became involved with a group of kids who experimented with drugs. We would gather together for fun and smoke dope or do harder drugs like LSD or MDA. Most weekends we would have parties that often involved doing drugs, drinking and listening to music.  This eventually led me to use needles to get high.

One night, I had decided to take things to a higher level, so I filled two needles with MDA and shot them at the same time. “It was powerful.” I thought.

Many nights, as I look back now, I recall my friends trying to take my drugs away from me. I won’t forget one particular night I woke up after a dramatic drug experience, my friends called me aside and told me how I’d scared them. They said I’d gone too far and asked what was wrong with me.  As I walked home that morning, I recounted my foolishness and began to consider what I’d done.  I said to myself “I could have died, how could I be so stupid?”

It was there that something extraordinary happened: I heard this voice, a startling voice that said, “Yes you could have died, but I didn’t let you because I have a purpose for your life.” I was sure someone came up behind me and said this because it felt so real. However, when I turned around, I was all alone; this scared me even more and left a lasting bang in my life.

Shortly after this incident, I stopped doing hard drugs but smoked occasionally; thankfully, I was never addicted to drugs.

We were not staunch Christians, but we sometimes attended a United Church just a few blocks from our home. The time came when my family decided to move from Edmonton (Canada) to Calgary, to pursue a business opportunity.  Meanwhile, I remained alone in Edmonton.

After about a year my parents moved, my family was struck by a severe tragedy; my youngest brother was accidentally killed.  That was probably the lowest point of my life.

“My brother’s death was an opportunity for me to leave Edmonton; a chance to leave the negative influences in Edmonton and start all over again”.

I eventually joined my parents in Calgary and soon became friends with a boy whose parents were friends of my parents.  He and his parents were Christians and there was something striking about him that drew me to him.  I think his family may have been trying to lead us to Christ.

One day, someone invited me to hear a young evangelist speak at a church we attended occasionally.  It was there that I heard the gospel clearly spoken. Thus, I decided to ask Jesus to forgive me and come into my life. I felt weird and quite confused as people hugged me.

The young evangelist told me that I needed to read the Bible and attend church so that I can grow.  This marked the start of my journey. Thank God! That journey has taken me a long way through many challenges and amazing experiences in my quest to know Christ more intimately.

Reasons to Quit the Drugs and Alcoholism

The flashbacks I experienced when I overdosed on LSD: These flashbacks were magnified when I smoked dope, and they terrified me.

When I started doing drugs, it was for fun; but apparently, there were risks that far outweighed the rewards.

Why Christians Need to Pray for Unbelievers

Looking back now, I wondered if anyone was praying for me to come to the Lord. The only one I could think of was maybe my grandmother. (My father’s mom). Although she never told me, and we never discussed spiritual matters, she was perhaps the only one I knew who attended church.

Paraphrasing 2 Corinthians 5: 14-15, We who have received the light of the gospel of Jesus Christ have a grave responsibility to no longer live for ourselves. But instead to be compelled by God’s love to witness, care for and pray for those around us who may be making bad choices.

My Advice to Anyone Contemplating Drugs

Drugs seem fun initially, but they momentarily become hazardous. Due to my foolishness, I became infected with hepatitis C. It wasn’t until years later that I discovered this.  At the time there was no cure; it was only last year that I received a costly treatment. Thank God! My liver was getting to a dangerous place, it could have killed me.

Motivated by My Past

Once I became a Christian, I was stirred to be a good influence on other young people and hopefully, help to prevent some of my mistakes reoccur in their lives. I joined an organization called Youth for Christ; they had a big reputation for reaching young people.  My friend and I enlisted the same day; we saw many delightful testimonies there.

My friend and I rented a large house and would often invite troubled teens to live with us. It was a tough time, yet exciting and fulfilling. We managed to get the youths involved in a program through Youth for Christ called Worth Unlimited where they worked and learned some life and social skills. One of these young people was a young man named Pat Nixon who became the founder of  The Mustard Seed a wonderful organization that ministers to many of our down and trodden out people of society, praise God!

God has done a fantastic work of transformation in my life; I can only thank him and give my life to Him as an expression of gratitude. He set me free from sin, and much more. God has a beautiful plan for each of our lives, His plan goes way beyond our understanding and even beyond our wildest imaginations.

I have been a Christian now for over 40 years now. He has blessed me with a beautiful wife, five great kids and soon to be five grandchildren. He has given me hope and a reason to live.

We’re always happy to read your comments. Don’t forget to leave us a line.

← Carefronting; What I Didn't Know Until I Talked it Out How Strong is your conviction? →